I spent a splendidly geeky day yesterday at the final conference of the iGov project at the University of Exeter, a project I’ve advised over three years. If there’s anything you ever want to know about how our crazily complex energy regulation system works, and what needs to change, just ask them. Believe me, they’ve got the answers.

I’ve found iGov’s work really useful in my work advocating community energy, and other innovations that don’t quite fit the system. My frustrations, and the need for iGov’s work, can be summed up in two words: “yes, but”.

This little phrase “yes, but” dominates the conversations I’ve had with regulators, including government departments, agencies and regulators, who between them control how the energy system works. In my conference talk, I tried to demonstrate by talking through a typical exchange between me and a generic ‘energy regulator’, handily represented through playmobil. Here we are: 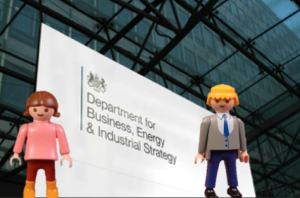 The exchange normally goes like this. What I’m asking them for is to provide a policy environment that helps community energy to meet the country’s energy goals (energy security, carbon reduction, affordability). 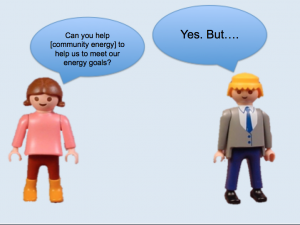 The response is enthusiastic but conditional. It is nearly always one of the following “yes, buts”:

The implication is that community energy (or other innovation) can be supported, but only if it doesn’t threaten these basic requirements. On the surface, this seems utterly reasonable, and impossible to argue with. After all, who could be against cost effectiveness? Or level playing fields? Could I honestly say that I don’t want to protect consumers, or that I don’t think the lights should stay on?

And yet I find myself taking issue with each of the “yes, buts”. They all point to a certain assumption about how the energy system works, and what should be valued within it. To take each in turn:

“Yes, but it must be cost-effective” 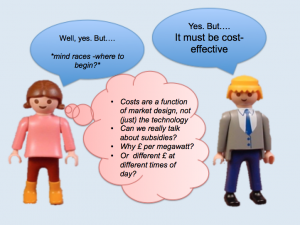 Ok. But costs are a function of energy market design, not just the technology. Can we really talk about subsidies, for example, in a market that wouldn’t exist without regulation, and that is entirely designed through government intervention? And why do we measure costs in terms of pounds per megawatt hour generated? What about pounds per ‘negawatt’ of energy not used? We could design a system which priced energy services in a radically different way.

“Yes, but we need a level playing field” 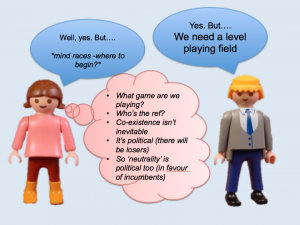 Ah, my old friend the level playing field. Hang on. What game are we playing here? Is community energy, or energy storage, or demand response, really the same game as centralised generation? Or do we have people all trying to play football, hockey and quidditch, on the same pitch, at the same time? Who’s the referee, and who are the rules designed for? There’s a political point behind this. Any system will produce winners and losers, and the supposed neutrality of the ‘level playing field’ language in reality favours the system incumbents, for whom the pitch and rules were designed.

“Yes, but we must protect consumers” 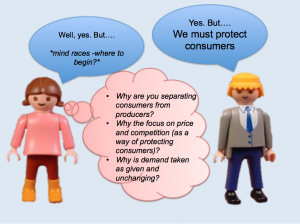 Of course we need to protect consumers. I don’t want to be ripped off, and neither does anyone else. But why is there such a focus on price (or rather, unit cost of electricity – see above) and competition, as the best way of protecting consumers? Why are we assuming that consumers are passive, and that the only thing that they can do is ‘consume’ electricity that has been generated for them? Increasingly, many consumers are also producers, with solar panels on their roofs; or non-consumers, if they manage to reduce their energy use; or owners, if they have bought into a local energy co-operative. The language of consumer and producer is just too simple to explain the complex relationships of today’s energy market.

“Yes, but the lights must stay on” 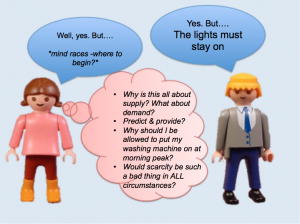 And last, it’s the favourite of the tabloid headlines: the spectre of electricity blackouts. But again, there are some assumptions that we need to question. Why is ‘keeping the lights on’ seen to be all about energy supply, or how much of the stuff we can produce? Why isn’t it about all the ways in which we could reduce demand, or spread demand out better in response to available supply? To put it another way, why shouldn’t I have to pay more to put my washing machine on at eight in the morning, when the electricity grid is stretched to capacity? Surely demand could be managed more efficiently. No-one denies that our society relies on electricity available when people need it, but that doesn’t mean we should be allowed to use as much as we want, whenever we want to. Would scarcity be such a bad thing in all circumstances?

All these questions are hard to address in the half-hour meeting that you might be lucky enough to get with a government official. Believe me, I’ve tried. And they’d have limited influence, anyway, in the underlying assumptions and cultures that drive the energy system. So that’s where iGov comes in – represented in playmobil world as wonderwoman (Catherine Mitchell was pleased). Here she is: 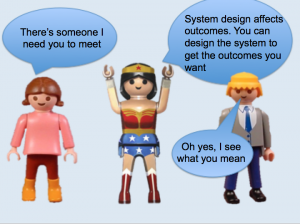 This, to my mind, is the main insight of iGov’s analysis: that system design affects outcomes. And that you can design the system to get the outcomes you want. All of iGov’s inevitably complex recommendations are just ways of fleshing out this basic point.

I hope I’ve made it clear that I’m not against consumer protection. Neither am I advocating blackouts, or really expensive electricity. But I am saying that these “yes, buts” are often used as a reason for regulating in a way that continues to prop up an expensive, outdated system. iGov’s analysis shows that it doesn’t have to be this way.